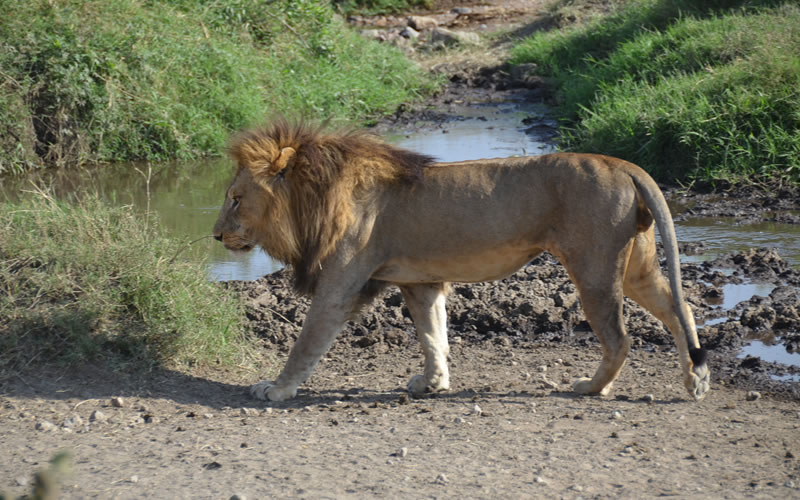 6 DAY: Safari tour which lets you understand how beauty your safari will be, you can share this with your friends who are also excited like you to go on a safari in Tanzania, we will connect you with one of our experienced, professional trained safari driver guide who will make sure that each of you is satisfied with the services.
We use our special designed safari vehicle 4*4 with a pop up roof for a better wildlife game viewing experience.

Day 0: Arriving
After pick up you will meet with your safari guide at your overnight hotel for a short brief concerning your adventure safari in the next morning.

Day 1: Moshi – To_Tarangire national park
This morning you will depart for Tarangire National Park. Spend the afternoon on a game drive in this park, The Park is home of elephant you might see the heard of up to 300 elephants scratch the dry river bed for underground streams while migratory wildebeest, zebra, buffalo, impala, and eland crowd the shrinking lagoons .It’s the greatest concentration of wildlife outside Serengeti ecosystem –a smorgasbord for predators – and the one place in Tanzania where dry-country antelope such as the stately fringe-eared Oryx and peculiar long –necked gerenuk are regularly observed ..In the evening time drive back to Manyara or MTO WA MMBU. On the way might see the sunset while driving to FANAKA campsite for dinner and overnight.

Day 2: Tarangire to - Serengeti
After breakfast drive to the oldest and most popular national park, also a world heritage site and recently proclaimed a worldwide wonder, the Serengeti is the famed for its annual migration, when some six million of hooves pound the open plain’s as more than 200,000 zebra and 300,000 Thomson’s gazelle join the wildebeest’s trek for fresh grazing. Yet even when the migration is quiet the Serengeti offers arguably the most scintillating game –viewing in Africa great herds of buffalo, smaller groups of elephant and giraffe and thousands upon thousands of eland, topi, kongeni impala and Grant’s gazelle. When you will be driving to Serengeti you go through the jewel in Ngorongoro crown is a deep volcanic crater –the largest unfolded broken caldera in the world -19.2 km in diameter, 610m deep and 304sq km in area. All afternoon you will be on game drive before enjoying dinner and the experience of sleeping in Serengeti/ Nyani campsite

Day 3: Serengeti National park
Adventure continues with packed lunch for full day game drive in order to discover more wonders of Serengeti. The presence of spectacular nature and wildlife is manifested at each glance. The most prominent fact about this park is the annual wildebeest’s migration that occurs between Decembers, March. April, June, July and November. The animal movement is involving million and millions of wildebeests, and zebra, together with the big numbers hyenas, leopard, jackals, lion and cheetahs which pursue the large herds to prey on them. If a tear wets your eye, you will be probably awed and realized the urgency of protecting this precious Eco-system. Return dusty to your Nyani campsite dinner and overnight.

Day 4: Serengeti to Ngorongoro conservation
Early morning coffer with biscuit then game drive continue in Serengeti until 11:30 drive back to the campsite for the branch and after depart to Ngorongoro Conservation area. Is geology and pre-history the two main geological rifts run through there nine volcanoes in the ngorongoro highland were formed during the past four million years. One of these oldonyo lengai (mountain of god) is still active. Over millennia the ash and dust from each eruption has been carried by the wind to form the fertile soil of the Serengeti plains. The earliest sign of mankind in the NCA is at laetoli where hominid footprints are preserved in volcanic rock 3.6 million years old. Further north, oldivai George has yielded a wealth of hominid and animal remains. Option with addition cost) we will stopover at Olduvai Gorge, boasting with a history dating back to the dawn of time. It was here, that the anthropologists Drs. Lois and Mary Leakey discovered the skulls of ‘Nutcracker Man’ and ‘Handy Man’, both very significant links in the chain of human evolution late afternoon transfer to the lodge where you will have dinner and overnight.

Day 5: Ngorongoro Crater
very early in the morning with breakfast box descend into the Ngorongoro Crater - a wonderful heritage site for wildlife. Ngorongoro is the multiple land use in which wildlife livestock and people [Maasai] are managed to live together without obvious interferences. This place is very unique [[caldera]] although people has accustomed of calling this place crater. You will have enough time to enjoy the caldera as you might have opportunity to see rhino and pride on lion and others animals as it’s also home of carnivores. Enjoy lunch very closely to the hippo pool … prepare for the lost pictures of those animals will be seen on the way out as it will be the last moments you have for this archeological site. Drive to FANAKA campsite/ which is very closely to rift valley for dinner and overnight.

Day 6: Manyara National park
After breakfast we head into the lush lake manyara national park for a game drive, famous for its green scenery, varied bird life, tree-climbing lions, hippos and baboons you will enjoy a different wildlife scene and have your picnic lunch in the bush. This will be the end of your safari after lunch we drive bank to Moshi or Arusha for dinner and overnight.