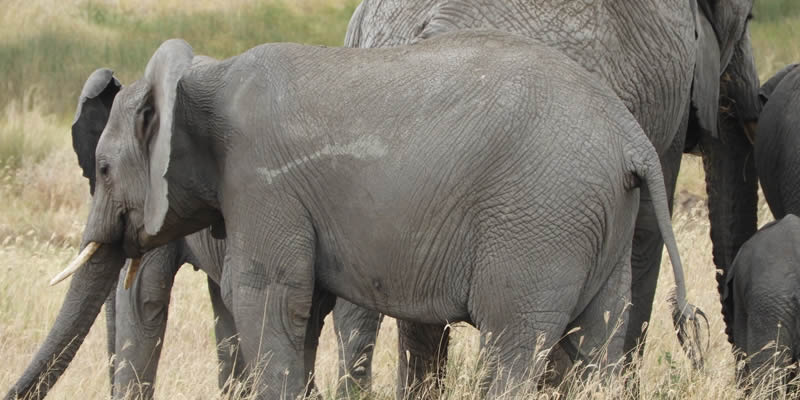 A warm welcome on your arrival, you will meet your AFRICANTRACES safari guide who will transfer you to the hotel for dinner and overnight

Day 1
Tarangire National Park. After breakfast the tour departs. First stop is Arusha Town for any last minute purchases before we head off on safari. Afterwards we head towards the Tarangire National Park for a game drive with picnic lunch at the park. Tarangire is well known for its huge elephant population and baobab trees. Herds of up to 300 elephants scratch the dry river bed for underground streams, ewhile migratory wildebeest, zebra, buffalo, impala, gazelle, hartebeest and eland crowd the shrinking lagoons. It’s the greatest concentration of wildlife outside the Serengeti ecosystem a smorgasbord for predators and the one place in Tanzania where dry county antelope such as the stately fringe eared oryx and peculiar long necked gerenuk are regularly observed.

Day 2 (two nights in Serengeti.)
After breakfast, depart for Serengeti National Park, via the beautiful high lying farmland of Karatu and the Ngorongoro Conservation Area. Leaving the highlands behind, we descend into the heart of wild Africa – the Serengeti National Park is oldest and most popular national park also a worldwide wonder, the Serengeti is famed for its annual migration, when some six million hooves pound the open plains, as more than 200,000 zebra and 300,000 Thomson’s gazelle join the wildebeests trek for fresh grazing the Serengeti offer arguably the most scintillating game viewing in Africa. Then heard to the central park area, known as the Seronera area, one of the richest wildlife habitats in the park, featuring the Seronera River, which provides a valuable water source to this area and therefore attracts wildlife well representative of most of the Serengeti’s species. Arrive in time for lunch and enjoy an afternoon game drive in the Serengeti national park. Dinner and overnight at CAMP SITES.

Day 4
Serengeti National Park – Ngorongoro Crater. Early morning game drive and after depart to Ngorongoro Conservation area are geology and pre-history the two main geological rifts run through there nine volcanoes in the ngorongoro highland were formed during the past four million years. One of these oldonyo lengai (mountain of god) is still active. Over millennia the ash and dust from each eruption has been carried by the wind to form the fertile soil of the Serengeti plains. The earliest sign of mankind in the NCA is at laetoli where hominid footprints are preserved in volcanic rock 3.6 million years old. Further north, oldivai George has yielded a wealth of hominid and animal remains. Option with the addition cost. We will stopover at Olduvai Gorge, boasting with a history dating back to the dawn of time. It was here, that the anthropologists Drs. Lois and Mary Leakey discovered the skulls of ‘Nutcracker Man’ and ‘Handy Man’, both very significant links in the chain of human evolution late afternoon transfer to Ngorongoro Simba campsite where you will have dinner and overnight.

Day 5
Ngorongoro Crater – Moshi or Kilimanjaro Airport. After an early breakfast, you will descend over 610 meters into the crater to view wildlife. Supported by a year round water supply and fodder, the Ngorongoro conservation Area supports avast variety of animals, which include herds of wildebeest, zebra, buffalo, eland, warthog, hippo and giant African elephants. Another big draw card to this picturesque national park, is its dense population of predators, which include lions, hyenas, jackals,and the ever-elusive leopard, which sometimes requires a trained eye to spot. We will visit Lake Magadi, a large but shallow alkaline lake in the southwestern corner, which is one of the main features of the crater. A large number of flamingos, hippos and other water birds can usually been seen here. Late afternoon transfer to Moshi For dinner and Overnight or Kilimanjaro airport drop off.